Being part of a European University – from a utopia into reality 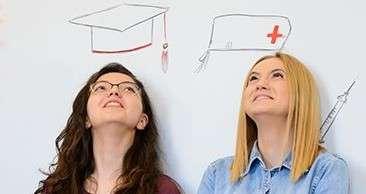 The concept of several universities united as a single European University would have been characterized as a utopia twenty years ago. Now, in 2020, the term "European University" seems closer to reality. Furthermore, things seem to happen naturally and easily.

The ever-widening horizons of knowledge, the mobility facilities offered by the EU and, last but not least, the technology that has become, especially in recent months, our “second right hand”, have made the idea of ​​a single European university more and more viable.

”Various” is not a randomly used term. There are seven countries, covering almost every corner of Europe. Each country has its own specifics, customs and even different economic and social policies.

In fact, this is the key to the “European University”. The more different the member countries are, the greater the chances of success are. Why? The answer is simple: each country brings its own contributions, ideas, values ​​and thus creates a superstructure that is greater than the sum of the elements it incorporates.

What are the advantages?

The benefits are many and obvious, and if there are any disadvantages of  being part of such an alliance, they are lost in the face of major and definite benefits. To understand this more easily, I will use the example of Transilvania University of Brașov, Romania.

UniTBv is a relatively young university with70 years history. Yes, sometimes being young can be a disadvantage. That is why we need more seasoned people and entities to guide us and share their experience. Thus, being part of an alliance that includes both “young” universities and universities with a rich history of over 150 years drives us forward and gives us confidence.

We all know that each country has its own academic models and learning methods. But it is difficult to determine which country has the best method. We can find elite students, teachers with a high degree of training and innovative teaching methods in every university.

What we can do, however, is to borrow methods, practices and ideas from each country and member of the alliance that add value to the didactic and academic act. Being part of an alliance makesco-working easier and communicationmore open.

We are all together in this

But our goal, as 3IN Alliance, is to become at the same time a model of cooperation, communication and intercultural exchanges that are able to embody and promote those values ​​that underlie the European project: inclusion, integration and involvement.

Mirela Cornea is responsible for communication of 3IN Alliance at Transilvania University of Brașov, Romania (UniTBv) . Mirela is working in the communication department at UniTBv.

3IN blog offers perspectives on Inclusion, Integration and Involvement. The writers come from the alliance of seven diverse higher education institutions across Europe, sharing a goal: a world where no one is left behind.

The core purpose of the 3IN Alliance, and our ambitious long-term objective, is to co-create an innovative European University. Read more from our website.

3IN in social media